Meet Wolfgang The Obese Beagle. From Fattest to Fittest: Part 1 Our mission as a canine wellness provider is to help families get and keep their dog healthy. We know exercise and nutrition is key to achieving the whole dog. We also have a soft spot for Beagles. Representing Beagle Freedom Project for a third NYC Marathon in a row, I want to highlight one of my absolute favorite Beagles. Wolfgang is an inspirational social media superstar, and he’s so much more than just a dog with cute pictures. He is letting the world in on his weight loss journey, and has all of us at The Fittest Dog cheering him, AND his Beagle sibs, along. Please follow Wolfie and fam at @obese_beagle on Instagram, and we guarantee you will fall in love and admire his Mom and Dad, Erin and Chad. Below is Part One of Wolfgang’s story, told by Erin. We know you will be inspired and moved, like I was and am daily.

Also, if you would like to support my NYC Marathon fundraising for Beagle Freedom, visit my page HERE. Any amount is helpful and appreciated! I support this organization, have visited them and their animals in person, and look forward to one more run in the name of Beagle!

When did you adopt Wolfgang? Tell us about his condition when you first adopted him? A very lethargic and obese Wolfgang!

My husband and I started fostering Wolfgang in May 2019, and ultimately adopted him in July 2019.  When we first took him home in May, Wolfgang weighed 90 pounds and could only walk a few feet. However, he was extremely happy and always wagging his tail, even though most of his tail was engulfed in fat.

The vet warned us that his heart was working extra hard to survive, so we had to be very careful with Wolfgang being outside in the Arizona heat. When we got him, it was already regularly in the 100’s and soon the temperature outside reached 120 degrees. Wolfgang had to be monitored very carefully when outside (and he was not allowed to be outside in the backyard by himself that summer) because he was very susceptible to heat stroke and he likely would not be able to make it indoors in time if he started to overheat.

Wolfgang was diagnosed with a thyroid condition, and takes daily medication. However, his condition was not severe, and so while that may have played a factor in his obesity, he became 90 pounds as a result of over-eating and no activity.

Did you adopt him with the intent of putting him on a weight-loss program? What steps did you take? Yes, we brought him home with the intent of getting him healthy. Wolfgang is not the first obese dog that we have rescued. All of our dogs (with the exception of one) have either been fostered or adopted through Arizona Beagle Rescue, although they have not all been obese (however, we have helped a total of 5 obese beagles).  The only dog that we have not fostered/adopted from Arizona Beagle Rescue was still a Beagle mix, and we got her when her former owners were no longer willing to care for her.

Our first obese Beagle we adopted weighed 58 pounds, and she reached a weight of 25 pounds (she has since passed of old age).  Our current dog, Andre (the elderly Beagle on our page) weighed about 70 pounds when he came to live here. He reached a healthy weight of 25 pounds (he has since lost some weight due to health issues and ideally we would like him to put on a few more pounds). Andre is now deaf and blind, but Wolfgang is very gentle with him. Andre still likes to go on walks (he actually likes walks a lot since his sense of smell still works) and Andre will go on walks with Wolfgang.

We started Wolfgang’s journey by getting a calorie count from the Vet and we stuck to that. For our dog family, eating healthy human grade food is what works the best. I made his meals (and he now eats human grade food from JustFoodForDogs), and we added any treats into his calorie count. The vet had us feed him 600 calories per day.  We also started taking him on almost daily walks. The first walk was to the mailbox and we worked up from there. We went out very early or very late at night due to Phoenix’s summer heat.

We believe that consistent, small steps can lead to big results. Wolfgang is now 32 pounds. Most of what appears to be fat on him is actually excess skin. Since it is believed Wolfgang is a senior, it will be harder for him to elasticize that skin, so it will probably always appear that he has some extra weight to lose, but it is really excess skin.

What were some early struggles for Wolfie and how much weight has he lost? 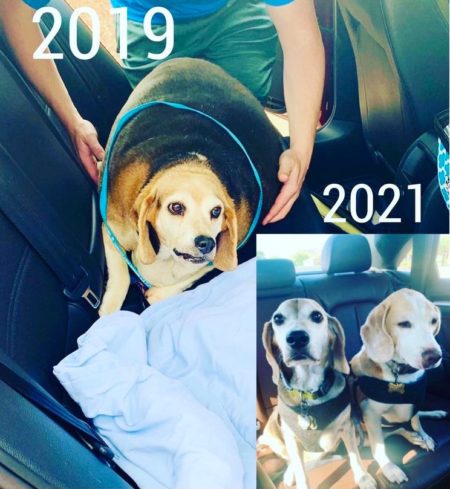 Wolfie’s first car ride home in 2019, and last month with Paddy! What a difference in two years!

Wolfgang has gone from 90 pounds to 32 pounds.  The early struggles were trying to logistically help a dog that was so morbidly obese. We were not sure how to get him safely in and out of our car!  Wolfgang could not fit through the dog door (we have a large) but we were able to find a really large one to put in the sliding glass door that he could fit through. It was also difficult seeing that Wolfgang obviously wanted to be more active than his body would allow. At 90 pounds, Wolfgang’s life mostly consisted of living on the floor, but he always wanted to go further on his walks (we had to hold him back) and he had such a good attitude.

Tell us a bit about Wolfgang’s favorite exercises. As you know, we love to run dogs, but it’s not always a good start for the severely obese. Wolfgang on the water treadmill with yet another toy in his mouth!

Wolfgang’s favorite exercise is when he gets to walk on the water treadmill at the Vet’s office, which we try to do several times a month. He also loves walking around the neighborhood but he doesn’t always understand the walk is for exercise because he sniffs everything! He regularly goes on a one mile walk several times a week, and he is training for a 5k this Fall. He also loves neighborhood walks because he loves barking at dogs and looking for cats (when he sees a cat, he has been known to run). Really, just walking is what he likes to do best, and when it cools down, we will go for longer walks.

During the summer months, we try to take Wolfgang to dog friendly hardware stores so he can get exercise while being in the AC. Between all the pets he gets, and the smells, it takes us quite a while to actually get any exercise in. Although we have a pool, and have tried many times to get Wolfgang to exercise by swimming, he doesn’t like the pool. However, only for relaxing on the raft or on the steps!

Wolfgang’s progress seems to have inspired other dogs in your home as well. Can you tell us a bit about your other Beagles? 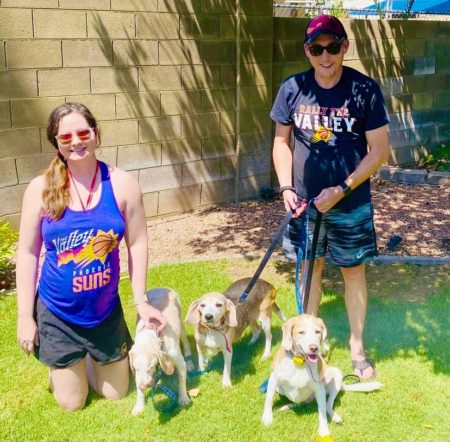 The mighty Mom and Dad, with (l-r) Andre, Wolfgang and Paddy

As mentioned above, we had 2 obese dogs before Wolfgang, just not as extreme (and two obese dogs after him). Andre we currently have, and he was 70 pounds before reaching a healthy weight. I think having Andre at the time helped Wolfgang want to be more active because he wanted to play with the him. At the start of Wolfgang’s journey we had another Beagle named Fred, who unfortunately died of old age (17) this Spring, but having Fred also encouraged Wolfgang. Fred would regularly run (in his younger days) 5 miles at a time so he was very active.

I think that Wolfgang has also helped other dogs. In January 2020 we fostered Jameson (Jamie) who was a 100 pound Beagle. Jamie’s obesity caused him to have two torn knees but he recovered after two surgeries. Jamie might have a little bit of Basset Hound in him because at 44 pounds, the Vet said he reached his goal weight. Jamie loved to exercise as soon as his knees healed and he did a couple 5ks.  We fostered Jamie for a year, but ultimately decided that fostering him was what was best for us and for Jamie.

In January 2021 we started fostering Paddy who was a 58 pound Beagle. However, in addition to his obesity, Paddy had serious mobility issues because in his former life he suffered two torn knees and did not receive medical attention. They fused together improperly, which means he puts a disproportionate amount of weight on his front paws.  However, with weight loss he is doing much better as he has built some muscle on his back legs (he is currently 35 pounds) and he loves going on walks more than anything. Paddy is likely close to his goal weight as most of what appears to be fat is excess skin, but he probably still has a few pounds to lose. He is elderly as well so it will be harder for his skin to bounce back. We decided to adopt Paddy this June, and we are very happy. With three older dogs, we think we are running a retirement home for Beagles. Sign Up for The Fittest Dog NewsletterCan't wait to hear about all our updates!?